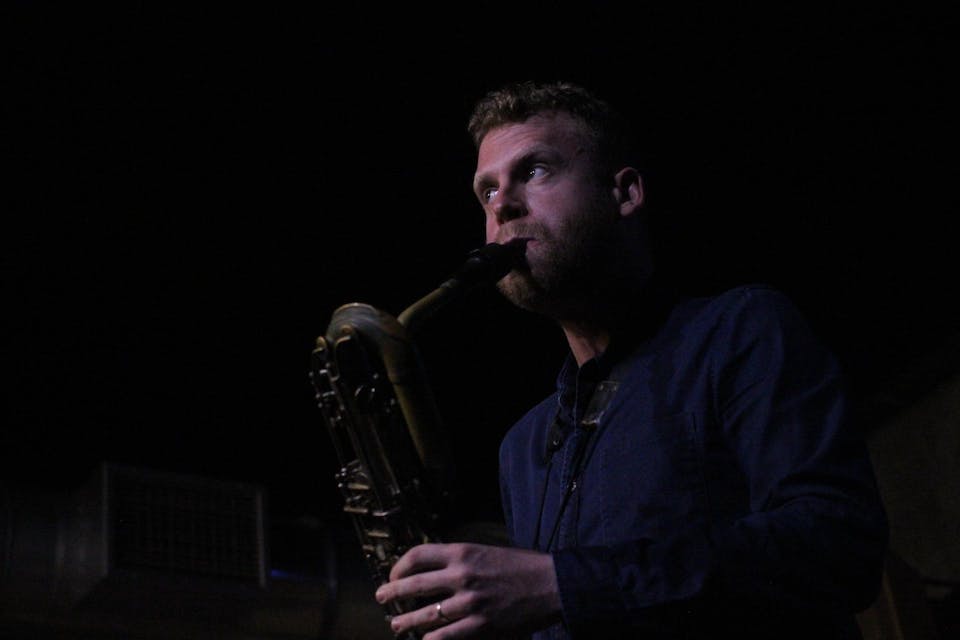 Jonah Parzen-Johnson makes music that challenges listeners with experimental electronic textures and embraces them with warm approachable melodies. His solo performances are a deeply intimate experience, as he endeavors to share who he is, how he see's our world, and the temporary moments of community that we can all embrace together. In his hands baritone saxophone and hardware electronics become a vehicle for "de facto folk songs," (Bandcamp Daily) as if he is, "constructing a whole musical town from specific, character-driven notes”. Since 2015, Jonah has toured over 40 thousand miles, by himself. He has performed on 4 continents, and in 9 countries. Everywhere from Jazz festivals to DIY noise clubs, living rooms to Contemporary Art museums. In July 2017, he released his third full length solo album, "I Try To Remember Where I Come From". The release has been described as, “haunted by abstraction but guided by a compassionate pulse,” (New York Times), as it, “vividly channels free-jazz with elements of improvisation and composition, combining to create a sustained meditative mood, transporting listeners to another world.” (Downbeat Magazine). In June 2019 he followed up the release with his first live recording, "Helsinki 8.12.18", an exciting preview of the music to come on his upcoming album LP, "Imagine Giving Up", out January 2020 on We Jazz Records. Jonah is a long-time Brooklyn resident, but his circular breathing, multi-phonics and inclusively experimental style owe a debt to Chicago, the city where he was raised. His devotion to an almost vocal approach places him in new territory for the instrument. Paired with a one-of-a-kind compositional style that utilizes analog synths, and hardware samplers & sequencers, Jonah continues to find himself ready to share his own unique musical world.

Chicago saxophonist Dustin Laurenzi has developed a distinctly personal approach to improvisation and composition that has garnered the attention of the city's creative music community. Recognized for his "offbeat approach to articulating harmonies and constructing melodies" (NextBop), Laurenzi's music is inspired and informed by jazz, folk, improvised music, and contemporary classical music. His inventive improvisational sensibilities have made him a sought-after musician in many circles of Chicago's vibrant music scene. Laurenzi has been a leader/co-leader of his own projects, Twin Talk, Snaketime, and Natural Language, as well as a member of Matt Ulery’s Loom/Large, the Quentin Coaxum Quintet, and Katie Ernst's Little Words, among others. He has released several albums featuring his original compositions, including Twin Talk’s 2019 release Weaver (37d03d), praised by PopMatters as “inventive and exhilarating.” Most recently, Laurenzi released Snaketime: The Music of Moondog (Astral Spirits/Feeding Tube Records), featuring an octet of Chicago’s leading improvisers interpreting music by the iconoclastic street musician, poet, and composer. Laurenzi has toured extensively with Grammy award-winning artist Bon Iver, with performances at Coachella Music Festival, Primavera Sound, and the Hollywood Bowl, among others. He also appears on the band's critically acclaimed 2016 release 22, A Million.

"Laurenzi has already achieved one of the toughest things to do in jazz without overdoing it: a genuine presence." - Chicago Reader